More than a month ago I posted about what was almost our last full day of Neocate.  That’s right – almost.   Nothing is ever easy and straightforward, right?  Here is the update…

Right after I wrote about my mixed feelings about giving up Neocate I got sick.  I had an awful head cold and being the selfless person that I am, I was kind enough to share this cold with E.  It was a weird cold, it came on pretty slowly but then hit me really hard.  Luckily the worst of it was over a weekend and my wonderful husband allowed me some sick time so that I was able to recover and he focused on keeping E as happy as possible.  It’s really hard for a rambunctious little boy to be sick and tired.  Jonathan is a saint and took great care of us!

One of the side effect of E’s cold is that he wanted his comfort food – Neocate.

Let me back up a bit.  I have to admit that I didn’t really have a plan for weaning him off of the Neocate.  I had no idea how it would go, but kind of assumed that he would be happy to drink almond milk or hemp milk and leave the formula behind. I hadn’t really decided how I was going to substitute the Neocate so I started to give E the choice of what he would drink in his cup.  He drinks 3 cups a day and they had always been Neocate.

Me:  ” Do you want Almond Milk or Hemp Milk in your cup?”

Me: “you want your regular cup?”

And there you have it.  I have no idea what he was actually trying to say.  E is still perfecting the whole talking thing and we are currently at a stage where context clues are critical.  It sounded kind of like “medicine cup,” which makes sense because Neocate is kind of like a medicine.  But we’ve never called it a medicine.  In fact, Jonathan and I actually had conversations about what to call his Neocate.  We didn’t want to call it “milk,” because it wasn’t milk and we didn’t want him to think it was ok to drink milk.  We also didn’t want to call it “formula” or “Neocate” because it sounded too clinical.  So we settled on just calling it his “cup.”   Regardless of what we called it, he made it perfectly clear to me that he wanted his Neocate cup.  We had this conversation three times a day for about a week.  If I tried to slip him almond milk or hemp milk, he made a face, handed it back to me, and reminded me that he wanted his “mesin cup.”

I decided not to fight it for several reasons.  One, he was sick.  I know that when I am sick I like to indulge in comfort foods and don’t want to have to explain myself.  Two, I was sick and I didn’t really want to, or have the energy to, fight with him.  I knew that we had enough Neocate stockpiled to last a couple more weeks and so there was no reason to push the issue while we both had low resources.  Third, and most importantly, I didn’t want the transition to be traumatic.  I didn’t want him to view this as an him vs. me issue.  I didn’t want him to have negative feelings about the other types of milk or just resist them because I was pushing so hard.  So I let it go for about a week.  I still asked each time what he wanted to drink and still presented two options: almond milk and hemp milk.  And he continued to request the old favorite.

Once we were both feeling better I started to push a little harder.  I actually wanted to do a trial of shelf stable almond milk. Blue Diamond makes individual servings of the shelf stable almond milk, which I wanted to be able to keep on hand for when we are out of the house or in a pinch but  E had only ever had the refrigerated version.  The shelf stable version had at least one different ingredient (tapioca starch) and because I wanted to know this safe to drink when we were away from home, I thought a full food trial was in order.   I was feeling a little brave, so I did make one change to our normal food trial protocol and decided to give him a full serving starting on day one.

I started to replace his morning cup with the shelf stable almond milk.  The first day of the trial I didn’t give him a choice.  I just handed him a cup of almond milk in the morning.  He tried to resist but I explained to him that we had to try a new almond milk so he had to drink that cup in the morning and he could have his regular cup later in the day.  For the first couple of days we did our almond or hemp milk dance for the next two cups.  He ended up getting Neocate for both.

Then I started to bargain with him a little bit and we compromised on one cup of Neocate a day.  He had to have his one cup of shelf-stable almond milk, then he got a cup of hemp milk, and then he could have one cup of Neocate.  He could choose when he had the Neocate but was reminded that he was only getting one. 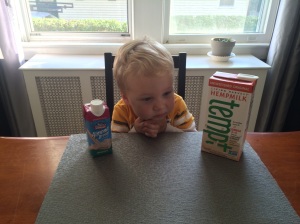 Finally we had a breakthrough!  One day he had his shelf-stable almond milk in the morning.  Then after his nap he chose hemp milk.  At bedtime I asked him if he wanted almond milk or hemp milk and he said “mesin cup.”  I said, “how about if we do another cup of almond milk or hemp milk?”  He thought about it and said “ummm, almond milk.”  I ran to kitchen and poured the almond milk before he could change his mind!  He drank it with no complaints!
The next night we went to my mom’s for dinner and I only took hemp milk, so he didn’t get a choice, but he didn’t complain and he drank it all!

That was a couple of weeks ago, and we haven’t had a cup of Neocate since. Three times a day I give E the choice between hemp milk and almond milk and he usually chooses one or the other. Sometimes he chooses neither but he hasn’t asked for his “mesin cup” since. It’s a little weird to not push his cups on him. The Neocate used to be the only way I knew he was getting the nutrients he needed, so there were days when I practically forced him to drink his cups. Now the cups are just extras. We offer them to fill the cup void and to help boost his calcium intake but his diet is complete and varied enough that he doesn’t need it. It’s crazy that I still feel a twinge of anxiety when he refuses a cup, but that goes away when the end of the day arrives and there are far fewer dishes 🙂

So, it looks like we are actually finished with Neocate.  After this long process it is less bittersweet and much more sweet.  Part of me still mourns the loss of my little baby but I am so proud of the little boy he is becoming!

Oh, and we are WEEKS away from our dairy challenge! So this may all change again… 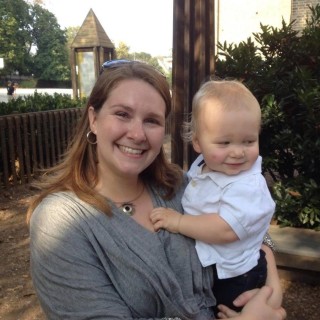